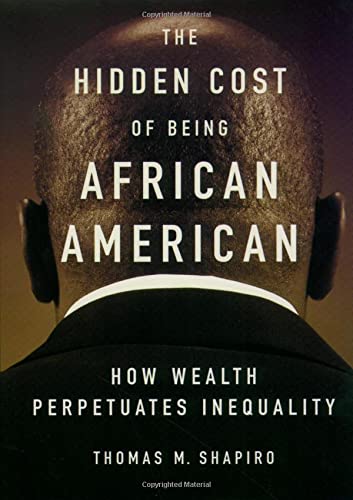 THE HIDDEN COST OF BEING AFRICAN-AMERICAN: How Wealth Perpetuates Inequality

Shapiro, coauthor of , has helped establish that the racial gap in wealth—i.e., assets, including property—is more enduring than the gap in income. That gap, a 10-fold ratio, is exemplified by what the author terms "transformative assets"—gifts, from parents and others, that work to lift succeeding generations economically and socially beyond their own achievements. Interviews with black, white and Hispanic families in Boston, Los Angeles and St. Louis show families with similar incomes living in stratified neighborhoods (and better school districts) thanks to parental help. Most of the white interviewees don't recognize the role of Shapiro's form of privilege in their lives, while middle-class blacks report far more issues with needy parents, relatives and friends. Shapiro, who holds a chair in law and social policy at Brandeis, also shows why it costs more for blacks to buy homes: discrimination in credit, higher interest rates (whites have more capacity to pay "points") and depressed home values caused by residential segregation all contribute. At the same time, Shapiro says, policies such as the federal tax break on mortgage interest perpetuates inequality by making the relatively rich richer. He proposes several class-based, tax-eased solutions at the federal level that go beyond social security: children's savings accounts; individual development accounts that match savings; and down payment accounts to help buy homes, drawn from a partial tax credit for renters. Such policies, he reminds us, would hardly be outlandish; they echo previous asset-building policies such as the Homestead Act, the GI Bill and Veterans Administration home loans. A reformed estate tax, he argues, would also help move toward fairness. With all the data Shapiro convincingly pulls together, this should be an essential document for policy groups and could reframe the debate around affirmative action and reparations.