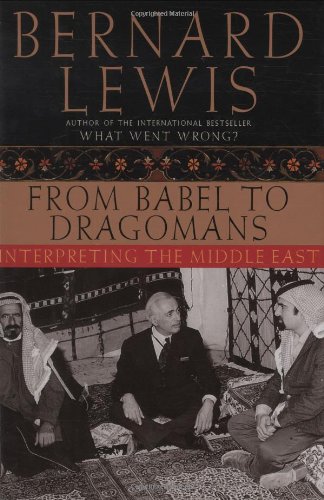 FROM BABEL TO DRAGOMANS: Interpreting the Middle East

As this collection of writings and speeches from the last 40 years demonstrates once again, Lewis is probably the world's most erudite scholar of the Middle East. The pieces cover virtually all aspects of the region—from medieval Turkish history to the roots of the Israeli-Palestinian conflict, and everything in between. Food for thought abounds: In one essay, Lewis notes that Islam and Christianity had different relations to Judaism because while Christianity wanted to replace Judaism, Islam was more comfortable incorporating Judaism into its traditions. The pieces are divided into three sections: past history, present history and reflections on the historical profession as it relates to the Middle East. The essays are more scholarly than Lewis's bestselling —for instance, one focuses on etymology and the origins of propaganda in early Arabic states. As a whole, they demonstrate Lewis's long-held contention that Islam has been unable to modernize and a clash of civilizations with the West was inevitable. Lewis is considered one of the intellectual architects of the U.S.-led war in Iraq, so it is of interest that in one essay, he asks what the West should do to help bring about change in the Middle East, and answers, "As little as possible." (Confused readers should note that the essay was written in 1957.) As a result of its scholarly bent, this book may attract a narrower audience than his other recent works, but they reflect the thinking of a profound mind.