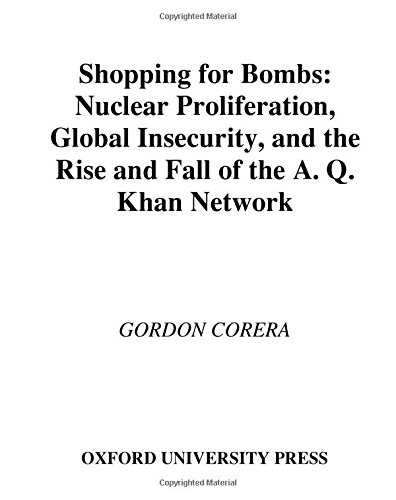 Shopping for Bombs: Nuclear Proliferation, Global Insecurity, and the Rise and Fall of the A.Q. Khan Network

Corera, a security correspondent for the BBC, offers a measured account of how a young Pakistani metallurgist named A.Q. Khan became the world's leading dealer in nuclear technology. The story starts as Khan watched Pakistan lose the 1971 war with India and vowed to help prevent it from happening again. Three years later, as India tested its first nuclear device, he offered Prime Minister Bhutto his help in creating the Muslim world's first nuclear bomb. In 1975, when his Dutch employer discovered Khan had stolen centrifuge designs, he fled to Pakistan. Though he was tried in absentia in 1983, it wasn't until January 2004, under pressure from the U.S. and Britain, that he was arrested for 30 years of selling nuclear materials and designs to Libya, North Korea and Iran. By the mid-1980s, Corera points out, the U.S. was aware that Pakistan had produced weapons-grade uranium. Drawing on CIA and diplomatic accounts of the spread of technology, Corera also examines why the Americans initially looked the other way as Pakistan joined forces in arming the mujahideen in Afghanistan before becoming an ally in the hunt for bin Laden.