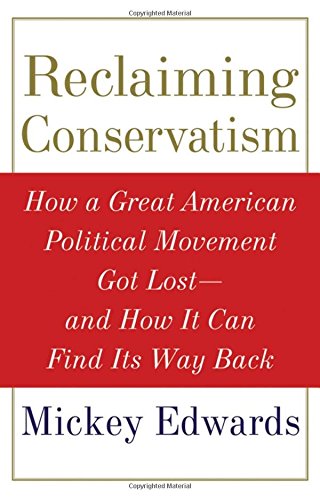 Reclaiming Conservatism: How a Great American Political Movement Got Lost—And How It Can Find Its Way Back

This book is a cri de coeur by former Republican congressman Edwards, a veteran conservative founding trustee of the Heritage Foundation who once ranked as the national chairman of the American Conservative Union. Edwards believes that conservatism has abandoned the ideas of limited government that once inspired it. This has been, he argues, the paradoxical price of conservative electoral success, and the process of winning and retaining this power has brought its own temptations. Taking Washington required coalition forming with neoconservatives, the religious right and former supporters of George Wallace who all owed little to the Goldwater-style conservatism “in which the thing being 'conserved' was the liberal revolution embodied in the Constitution.” According to Edwards, these other views have intensified as the Bush administration presides over an evolving security state, and the movement Edwards once held sacrosanct is now unrecognizable. This is a critique with force and eloquence, but its author is better at defining what has, from his perspective, gone wrong, than providing persuasive suggestions as to how conservatives of his mindset are meant to win elections today.