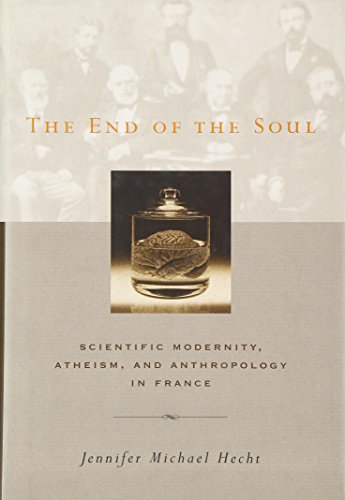 THE END OF THE SOUL: Scientific Modernity, Atheism, and Anthropology in France

In late 19th-century France, the Catholic Church, which had once been revered as an authority in political and religious matters, found itself under attack from many sides. Chief among its antagonists was the Society of Anthropology in Paris, founded by Paul Broca, many of whose members took it upon themselves to de-Christianize the republic and elevate the new scientific study of human origins to a kind of religion. The result, according to historian Hecht (author also of the forthcoming , Nov. 2003), was the transformation of the country into a secular republic where the rules of science, not the dogma of religion, reigned. Hecht provides a detailed study of this brief but significant moment by focusing on the many anthropologists whose contributions to this young science helped steer the republic's course toward freethinking atheism. Louis-Adolphe Bertillon and Georges Vacher de Lapouge set out to demonstrate that human nature had a corporeal basis rather than a spiritual one. They saw brain and skeletal size as the measure of human nature, conveniently doing away with the soul. As Hecht points out, these scientists even formed a Society of Mutual Autopsy, where they waited for fellow members to die in order to dissect them. Once these anthropologists could understand the brain, she observes, they thought they could apply their findings to the culture as a whole and encourage social progress on a scientific basis. Although Hecht's academic tone makes for slow reading, she succeeds admirably in providing a fascinating glimpse of a little-known chapter in French history. Illus.