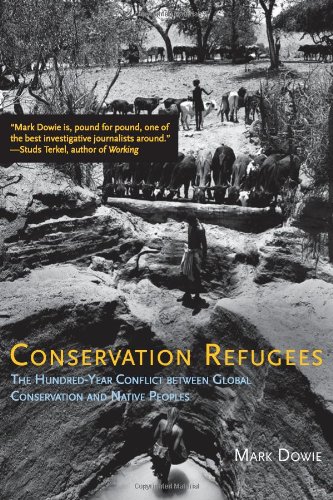 With a beautiful balance of critique and sympathy, Dowie ( ) challenges the halos of the major multinational conservation nonprofits, including the Nature Conservancy and the Worldwide Fund for Nature, in this exposé of their disastrous treatment and expulsions of indigenous peoples living in nature reserves and parks. Dowie traces the myth of “wilderness” as an “idealized version of nature” to John Muir, the “Godfather of Conservation,” who denied that Indians ever lived in Yosemite despite their longtime cultivation of the area; he was “revolted” by their eating habits and “uncleanliness” and said they “had no place in the landscape.” This American concoction of a pristine wilderness park, and the idea that humans are not a part of nature, was exported throughout the world, wreaking havoc among both dislocated indigenous people and the environments that they had nurtured with traditional knowledge, for hundreds, even thousands of years. Dowie comes to a surprisingly optimistic conclusion, noting recent collaborations between indigenous peoples and conservation organizations—who are beginning to realize that “only by preserving cultural diversity can biological diversity be protected, and vice versa.”