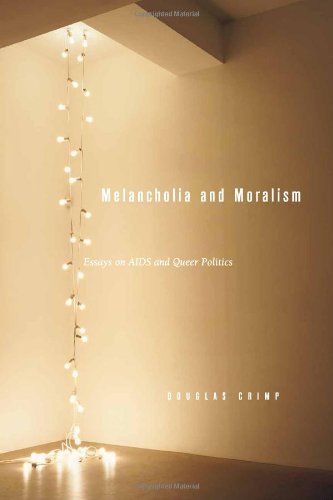 MELANCHOLIA AND MORALISM: Essays on AIDS and Queer Politics

These 16 essays, originally published in journals or given as speeches between 1987 and 1995, cover the social and political consequences of AIDS, topics increasingly ignored or downplayed. Crimp (), professor of visual and cultural studies at the University of Rochester, casts a wide net in a variety of such interrelated fields: the politics of displaying AIDS-related art at museums, the use of the term "politically correct" to attack politicized art about the epidemic, how the mainstream media covered Magic Johnson's announcement that he was HIV-positive, the relationship of "outing" to AIDS activism. While writing in an academic tone, Crimp is unafraid of practical (and controversial) topics, as in the 1987 essay "How to Have Promiscuity in an Epidemic" which traces how antisexual, homophobic attitudes about sex fueled rather than halted the spread of AIDS, and will raise eyebrows even today. Crisp is also not afraid of criticizing other gay male writers, like Randy Shilts and Andrew Sullivan, though his judicious comparison of Sullivan's AIDS status and his own recent HIV infection is both moving and insightful. Almost all of these essays were written in the heat of political and social debates and maintain their relevance in a changed world, though some readers will lament the lack of emphasis on AIDS in the developing world.