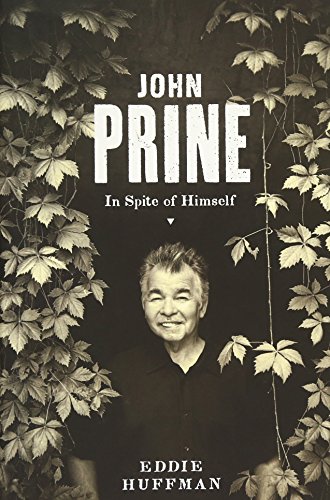 John Prine: In Spite of Himself

In 1970, the late Roger Ebert wrote of John Prine’s performing style in the Chicago Sun-Times: “He appears on the stage with such modesty that he almost seems to be backing into the spotlight.... He starts slow. But after a song or two, even the drunks in the room begin to listen to his lyrics. And then he has you.” In the same way, music critic Huffman slowly backs into this fan’s notes and heartfelt appreciation of Prine and his music. Weaving well-known biographical details (Prine was a mail carrier in Chicago when he got his start) into meticulous sketches of the making of each album—and reviews of those albums—Huffman offers an admiring portrait of an often restless though always canny songwriter. Reflecting on Prine’s eponymous 1971 debut album, Huffman points out that “everything his fans would come to love about him—drama, humor, memorable characters, great stories, a badass outsider stance offset by a reverence for tradition—could be found, fully developed... the recordings showed ample room for Prine to grow as a musician... but the songs were built to last.” Two years later, on the album Sweet Revenge, Prine “sounded fully integrated with backing musicians, and he once again rose to the challenge of writing a compelling batch of tunes.” In the 1980s, Prine started his own record label, Oh Boy, and in 1991, he released The Missing Years, which Huffman calls Prine’s Born to Run or Damn the Torpedoes, a swaggering rock statement that fully realized his potential.” Huffman’s book will make us want to pick up Prine’s albums and listen to them once again or for the first time. (Mar.)
close
Details