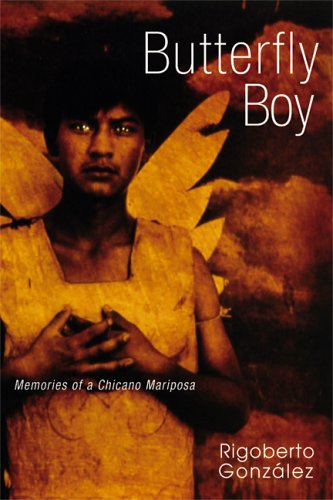 This moving memoir of a young Chicano boy's maturing into a self-accepting gay adult is a beautifully executed portrait of the experience of being gay, Chicano and poor in the United States. Now an associate professor of English and Latino studies at University of Illinois at Urbana-Champaign, Gonzalez writes in a poetic yet straightforward style that heightens the power of his story ( is Spanish for "faggot" as well as butterfly). As he describes growing up in an extended migrant-worker family, his youth in Bakersfield, Calif., and his departure for college, some readers may recognize similar characters and situations from his 2003 novel, (University of Oklahoma). Like other gay coming-of-age memoirs, this one recounts the hardship of being an effeminate youth with a high singing voice and a penchant for cross-dressing, and the delight in discovering the homoeroticism of classic literature by Melville and E.M. Forster. But Gonzalez transforms these standard conceits into an affecting narrative in which his class and ethnic identities are as vital as his often painful metamorphosis into a fully formed gay man.