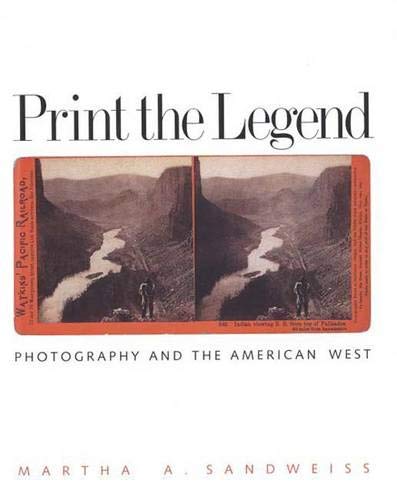 PRINT THE LEGEND: Photography and the American West

More a scholarly tome than the usual Ansel Adams–like coffee-table fixture, this study sets its dual focus on "a new pictorial medium and the new distinctively American region" of the 19th century. As the title suggests, it is no more about how the West really was than it is a simple compendium of lovely images. Sandweiss, a professor of history and American Studies at Amherst College, attempts a difficult balance of art and history, where photographs and social studies complement each other rather than compete for intellectual space. Time is on Sandweiss's side: as she shows, America's frontier narrative and the new art form did more or less rise up together. The book stakes its labors on the assumption that, even if the confluence is sheer chance, the influence can't help running both ways: photos helped make the West, and the art form was in turn shaped by the new needs of a newly shaped nation. Sandweiss is richly informative and thoughtful in recounting and reconsidering the times, no surprise for an editor of the excellent . Her account of the cultural impact of the Spanish-American War is probing; the Native American history here is inclusive, surprising and subtle. It would be quite difficult to handle the photography with equal élan, especially given the author's commitment to the significance of "public photographs"—in large part, fairly repetitive portraiture—and Sandweiss's readings of pictures are rarely insightful, if sometimes usefully direct. As a result, the careful and thoughtful book will appeal less to students of photography than to those interested in the place and time, and how our image of it came together.