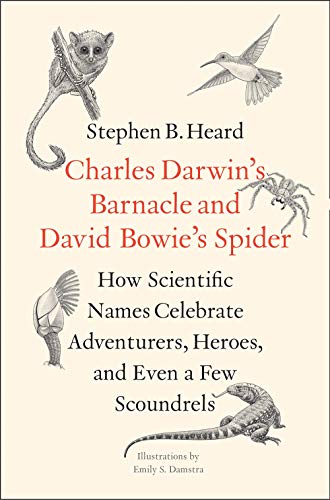 In this enlightening volume, biology professor Heard (The Scientist’s Guide to Writing) discusses how scientific names are chosen. He begins with Carl Linnaeus, the 18th-century Swedish botanist whose binomial system, intended to aid classification, allowed species names to be more than simply descriptive. In choosing names for organisms, scientists could reveal elements of their own personalities: their sense of humor, for example, or their biases. Chapters on two eponymous species, Strigiphilus garylarsoni and Neopalpa donaldtrumpi, prove particularly amusing. The former, a louse, honors Far Side cartoonist Gary Larson, whose wildly absurd scenarios—slugs having dinner parties, porcupines with punk hairdos—belied an “insightful understanding of how nature works,” which won him a following among scientists. The latter, a moth whose “remarkable shock of large, blond, comb-over scales” reminded scientist Vazrick Nazari of the 45th president, allows Heard to examine the phenomenon of insult naming. It’s one that goes all the way back to Linnaeus, who, stung by another scientist’s criticism of his writing on flowers’ sex lives as “lewd,” named a weed with notably tiny flowers after his prudish colleague. Entertaining and accessible, Heard’s discussion will appeal to both scientific and general audiences. With 25 b&w illus. (Mar.)
close
Details