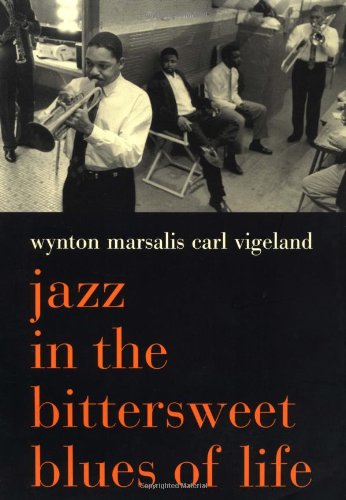 JAZZ IN THE BITTERSWEET BLUES OF LIFE

American jazz sweetheart Marsalis gives readers a seat on his old septet's tour bus for a ride down memory lane (see Q&A, p. 58). It's the early 1990s, and the trumpeter is coming into his own as a composer, despite his tight road schedule (check-in at hotel, go to sound check, eat supper, iron the suit, play the gig, snooze a bit, hit the road). Should a day off (or a few free hours) arise, he's speaking at a local school, composing a ballet, recording an album or playing a ballad to his sons on the phone. "He'd take his naps in the next life," writes coauthor Vigeland, who tagged along on tour. Marsalis's productivity and growth during this period would lead to nine Grammys, a Pulitzer (previously awarded only to classical composers) and his directorship of the Lincoln Center Jazz Orchestra. Loosely using a sort of call-and-response style, the book swings between Vigeland's () fly-on-the-wall documentation and the poetic solos of Marsalis, philosophizing on jazz, joy, love and life—all synonymous for him. For better or for worse, it's easy to lose one's sense of time and place on the road—and it's equally easy to do so in this book. "The narrative's logic is one of feeling, not geography or chronology, and it develops accretively, elliptically," explains Vigeland. At their best, the authors show how Marsalis's road experiences shape his music and the tightness (musically and personally) of the septet. The glimpse into Marsalis's New Orleans upbringing in that famous first family of jazz (Ellis, his father, and Branford, his brother) fascinates, but leaves the reader hungry for more.