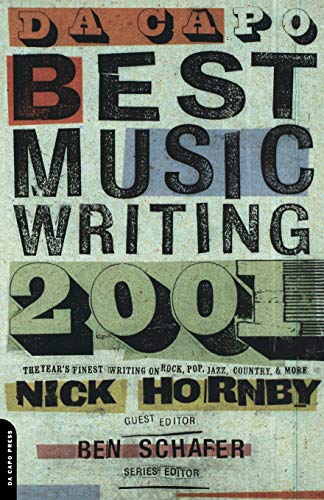 Da Capo presents an anthology of exemplary music writing from the likes of , , the , the and during the last year, a dual history of what music makes of culture and what culture makes of music. Despite seemingly boundless support for the cult of youth, editor Hornby (; ) keeps his personal preferences in check here, introducing the collection with caveats and contrition, and a humanist vibe. Notable standouts include N.R. Kleinfield's meditations on hip-hop and race, Rian Malan's historiographic study of "The Lion Sleeps Tonight" and a West Bank rapper slice-of-life from Lorraine Ali. Overall, however, this second collection in the Da Capo series leans toward the most prolific and market-friendly genre—namely, the -culture of rock and roll. Follow the cash cow through youthful self-indulgence (Richard Meltzer on Cameron Crowe) to righteous self-indulgence (Jim DeRogatis on Third Eye Blind) and the eventual self-indulgent nostalgia (Nick Tosches on the back rooms and wise-guy days of "pay-per-play"). These are telling pieces on tried-and-true themes. But the integrity of the work often supersedes the spectacle and thrill of the subject matter, offering in their place wit, intelligent criticism and consistently great writing. Unfortunately, this is another one for the boys: the lack of women writers and performers represented reveals an obvious and disappointing slant typical of the arena (and history) of rock. Hornby, of course, will attract an audience somewhat bigger than the music-geek population.