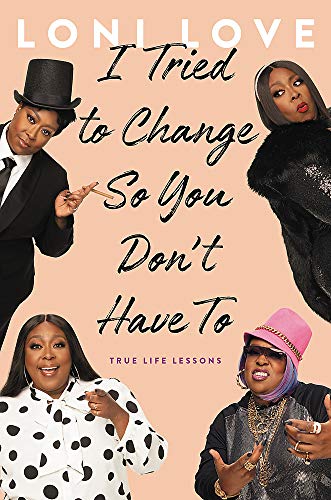 I Tried to Change So You Don’t Have To: True Life Lessons

Comedian and The Talk talk show cohost Love (Love Him or Leave Him, but Don’t Get Stuck with the Tab) delivers an upbeat memoir about how she overcame poverty and built a career in entertainment. Love grew up living in public housing in Detroit, Mich., in the 1970s and ’80s and writes powerfully of getting kicked out of the house at 17 by her mother, who preferred her boyfriend to her daughter; sleeping in her car while working an assembly line job at General Motors; getting a scholarship to study engineering; and taking a job at Xerox while nurturing her dream of becoming a stand-up comic. A charming narrator, Love amusingly discusses living in Compton, Calif., with a former boyfriend and his mother, who wanted to turn her into a “black Stepford wife”; struggling with her weight; hustling for years to get low-paying stand up gigs (at venues including the back room of Roscoe’s Chicken and Waffles) before landing a job on The Talk in 2013; and falling in love in her late 40s with a white guy. Throughout, she offers such useful advice as “say yes to opportunities that replenish your spirit as much as your wallet.” Love’s moving memoir will resonate with readers, especially women, in need of personal and professional motivation. (June)

Correction: An earlier version of this review misstated the name of the television show the author cohosts.