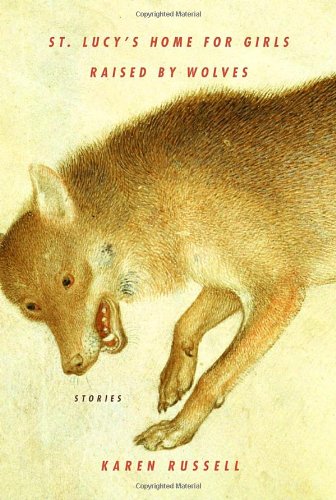 A series of upbeat, sentimental fables, the 10 stories of Russell's debut are set in an enchanted version of North America and narrated by articulate, emotionally precocious children from dysfunctional households. Each merges the satirical spirit of George Saunders with the sophisticated whimsy of recent animated Hollywood film. In "Ava Wrestles the Alligator," a motherless girl, "staying in Grandpa Sawtooth's old house until our father, Chief Bigtree, gets back from the Mainland," struggles to understand her big sister's blooming sexuality, which seems to grow scaly and incarnate. Timothy Sparrow and Waldo Swallow Heartland, the two brothers of "Haunting Olivia," search for their sister's ghost near Gannon's Boat Graveyard using a pair of magic swimming goggles. In the title story, the human daughters of werewolves are socialized into polite society. Russell has powers of description and mimicry reminiscent of Jonathan Safron Foer ("My father, the Minotaur, is more obdurate than any man," begins "Children's Reminiscences of the Westward Migration"), and her macabre fantasies structurally evoke great Southern writers like Flannery O'Connor. If, at 24, Russell hasn't quite found a theme beyond growing up is hard to do (especially if you're a wolf girl), her assorted siblings are rendered with winning flair as they gambol, perilously and charmingly, toward adulthood.