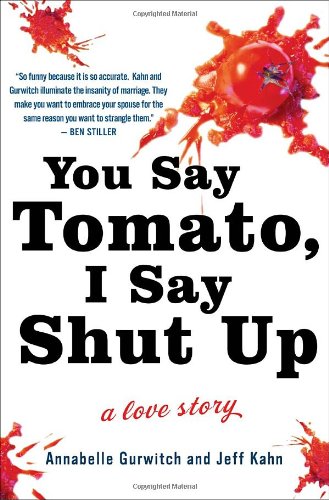 You Say Tomato, I Say Shut Up: A Love Story

Married for 13 years, Gurwitch and Kahn look back with laughter at the highs, the lows, and their “different marital needs.” Writer-actor Kahn ( ) won an Emmy for scripting ; actress Gurwitch ( ) produced a documentary adapted from her 2006 book . By teaming for this equally merry marriage memoir, the duo doubles the giggles and guffaws. Over many months, they have been doing readings and performances from this book in progress, when it had the working title, . The book includes alternating “He Says”/”She Says” sections. Opening with Jeff’s pursuit of Annabelle, they write in a lighthearted fashion about dating, cats, living together, marriage, the honeymoon, and lots of sex: “In the beginning, there was sex and it was good. In the middle, it became something to schedule like a tennis lesson and flu shot.” A genuine crisis interrupted their comedic conflicts when their son was born with birth defects, a situation that affected their marriage: “We became each other’s psychological punching bags.” In the concluding chapter, they speculate on the future direction of their marriage, possibly “like the bonds of emperor penguins and Gertrude Stein and Alice B. Toklas.” Readers will hope they stay together to write more heartfelt, funny books like this one.