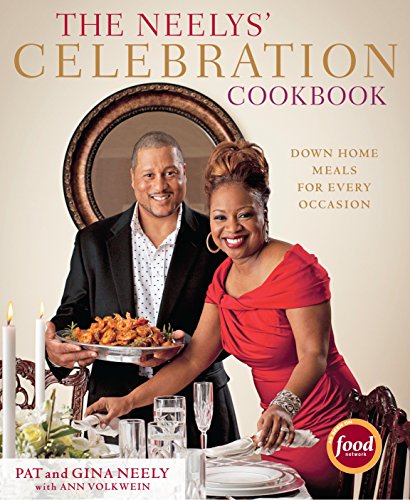 The Neelys' Celebration Cookbook: Down Home Meals for Every Occasion

Hosts of the Food Network series Down Home with the Neelys, and authors of a cookbook of the same name, the Neely's return with menus for 29 occasions ranging from the predictable (Super Bowl Sunday, Fourth of July) to the unusual (a housewarming or girls' night out) for each month of the year. Yes, there's spinach dip, deviled eggs, and the barbecue the Neely's are known for (BBQ potato chips, chili mac, ribs, burgers, nachos, and even a smoky take on popcorn), but they also include crab-stuffed mushroom caps, a grilled shrimp cocktail served with a chipotle-laced cocktail sauce, Pumpkin and Sweet Potato Bisque, a riff on the classic Cosmopolitan that employs pomegranate juice in lieu of cranberry, and the simple, satisfying Grilled Lobsters with Lemon Basil Butter. While the Neely's offer plenty of fried dishes, they also include lower-fat versions that involve other cooking methods. Though they haven't reinvented the wheel, this thoughtful range of menus suit cooks with a wide-range of skill levels, provided guests' tastes run toward the smoky and spicy end of the scale. (Nov.) %C2%A0 Party Like a Culinista: Fresh Recipes %C2%B7 Bold Flavors %C2%B7 Good Friends Jill Donenfeld and Josetth Gordon Lake Isle Press (lakeislepress.com), $21.95 trade paper (176p) ISBN 978-1-89110-550-0 In this veggie-friendly tome, caterers Donenfeld and Gordon pull back the curtain to reveal their favorite dishes for get-togethers, many calling for just a handful of ingredients. Grouped into categories such as parties for two or daytime parties, the duo offers a three to five course menu that includes small bites, as well as desserts and drinks. The dishes, many of which are vegetarian and even vegan-friendly, vary wildly. Simple party-starters such as Chili Lime Almonds or Spiced Roasted Chickpeas come together quickly, but others will take more time, sourcing, and skill (Kimchi Scallion Pancakes, Crab Fritters with Creamy Mustard Sauce, Skirt Steak with Quick Pickled Leeks, Scapes and Gigante Beans). While the book is well-designed and easy on the eyes, it's at the expense of the recipes since no space is left for a description of the dish or what the diner can expect. More creative fare such as Cinnamon Corn Ice Cream with Blueberries, Edamame Dumplings, and Caramelized Onion Cr%C3%A8me Fraiche with Blistered Veggies would have benefited from more elaboration. Experienced hosts and hostesses will find much to enjoy, but novices looking for a party planning catch-all may wind up frustrated. (Oct.)
close
Details