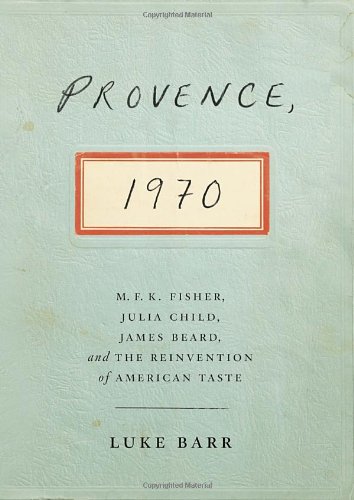 M.F.K. Fisher’s great-nephew Barr, a Travel + Leisure editor, uses considerable research to recreate a momentous convergence of preeminent American food writers in Provence in the fall of 1970 that determined not only the trajectory of their subsequent careers but the direction of American food culture as well. France, of course, was the training ground for these writers, starting with Fisher and her bold, sensual 1937 primer on eating, Serve It Forth; journalist James Beard and his 1952 Paris Cuisine; Julia Child and Simone Beck with their wildly popular 1961 landmark, Mastering the Art of French Cooking; artist and longtime Francophile Richard Olney and his authentic, passionate The French Menu Cookbook. Yet as of 1970, they were all still finding their voices and styles. While Olney lived permanently in Sollies-Toucas, the Childs and Becks had adjacent country houses at La Pitchoune, and the others were visiting nearby Provencal towns, joined by their longtime Knopf editor Judith Jones, her husband, and a prickly aristocratic couple, Eda Lord and Sybille Bedford. The personalities mixed uneasily, like oil and water, during long, elaborate communal dinners held at various group members’ homes. Barr, a felicitous stylist, derives much of his account from Fisher’s journal of the time, when she was in her early 60s, living a solitary existence between California and France, and trying to settle on her next literary project: French or American? Barr finds delightful fodder for foodies. (Oct.)
close
Details