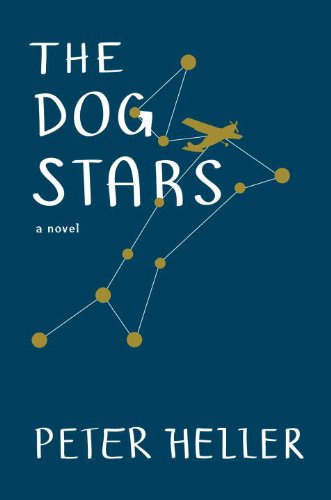 In the tradition of postapocalyptic literary fiction such as Cormac McCarthy’s The Road and Jim Crace’s The Pesthouse, this hypervisceral first novel by adventure writer Heller (Kook) takes place nine years after a superflu has killed off much of mankind. Hig, an amateur pilot living in Colorado, has retreated to an abandoned airport from which he flies sorties in “the Beast,” his vintage Cessna, over isolated pockets of survivors. His only neighbor is the survivalist Bangley, who’s sitting on a stockpile of weapons and munitions, and the only visitors are plague survivors who have descended into savagery. Hig’s one real comfort, besides the memory of his dead wife, Melissa, who fell victim to the flu while pregnant, is his dog, Jasper. But when that comfort is withdrawn, Hig flies west in search of the radio voice that called out to him three years before. Instead, he ends up being shot down and restrained by a doctor named Cima and her shotgun-toting father, a former Navy SEAL. With its evocative descriptions of hunting, fishing, and flying, this novel, perhaps the world’s most poetic survival guide, reads as if Billy Collins had novelized one of George Romero’s zombie flicks. From start to finish, Heller carries the reader aloft on graceful prose, intense action, and deeply felt emotion. Agent: David Halpern, the Robbins Office. (Aug.)
close
Details