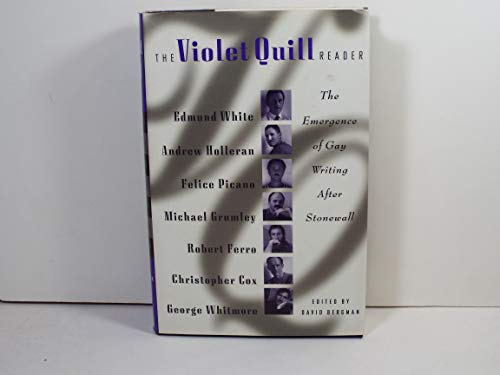 The Violet Quill Reader: The Emergence of Gay Writing After Stonewall

In 1980 and 1981, seven prominent gay authors--Edmund White, Andrew Holleran, Christopher Cox, Michael Grumley, Robert Ferro, Felice Picano and George Whitmore--met to discuss and read their writings. Known informally as the Violet Quill Club, they shared a desire to write works that reflected their gay experiences, works aimed specifically at gay readers who would not challenge their point of view. Collectively, the notoriety and writings of the Violet Quill changed the course of gay literature, replacing the longstanding image of the doomed or martyred homosexual with one of active protagonists speaking, as Bergman ( Gaiety Transfigured ) puts it, the ``language gay men use among themselves.'' Much of this anthology consists of reprints organized in loose chronological order, beginning with White's letter to friends about his participation in the Stonewall Riots. Included are several excerpts from novels, many of them written during the heady disco era of the 1970s and depicting gay life in Manhattan and Fire Island. These and subsequent selections reveal not only the uneven talents within the group but also the maturation of some of its writers. Objective biographical portraits of the Violet Quill members are missing, though life histories can be pieced together from Bergman's notes to each selection and from one of the anthology's chief delights, extracts from the unpublished journals of Picano and Grumley, and from correspondence between Ferro and Holleran. Four members of the Violet Quill have been lost to AIDS and a fifth is reported ill; in the later selections, the writers grapple with the disease in fiction and nonfiction, as both plotlines and personal lives become rewritten. The most powerful moment of the anthology occurs, in fact, when, following Ferro's death, Holleran examines his more than 20 years of friendship with that writer. Bergman notes that ``the theme of friendship unites all the fiction of the Violet Quill . . . a theme that, more than any other, separates gay fiction from straight fiction''; as Holleran says, ``It really was a brotherhood.'' Photos. (May)
close
Details