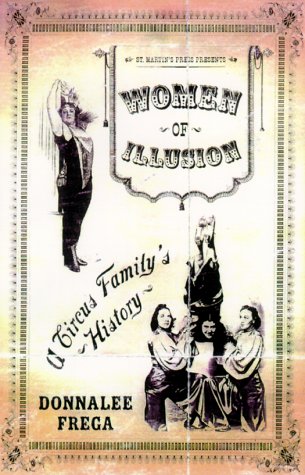 The daughter of circus performers, Betty Huber came to America as a teenager in the 1930s to reunite with her parents after a torturous girlhood in German convent schools. Since her strong-woman mom, Babette, was still unassimilated, mother and daughter ended up discovering America together. Babette performed at a KKK conference and wondered why no one else was doing any tricks—with her bad English, she'd thought the organization was the "Ku Klux Klown." With a few exceptions (a gig at the 1939 World's Fair, for example) most of Betty's jobs were in girlie shows, which she subverted by stitching rhinestones onto her flesh-colored panties. Unfortunately, Frega () can't tell Betty's story without constant moralizing and drawing comparisons to her own far more conventional life as an ex-academic. By the end of the book, Frega's nonstop hand-wringing has overwhelmed Betty's deliciously wicked stories, as the author searches for ways to render Betty's complexities less disturbing. The circus is a world in which histories and identities can be invented at will, Frega points out in the introduction; Betty's real magic is her ability to keep doing this, much to the dismay of her biographer. (At one point, when Betty is describing a particularly death-defying stunt, Frega even admits, "I am probably not the ideal recipient for these stories.") Still, it's worth the cover price to learn such intriguing facts as what Betty's "tummy money" was (the half dollar emergency fund she stashed in her navel).