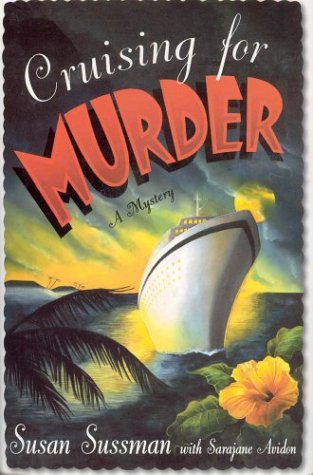 In her second appearance (after Audition for Murder) as an amateur sleuth, wisecracking Chicago actress Morgan Taylor grabs center stage and never lets go in this frothy, high seas murder mystery. When Morgan accepts a last-minute invitation to replace a performer on a Caribbean cruise ship, she believes that her predecessor, Angela Parker, accidentally fell to her death. Once aboard, however, she learns that Angela's shipmates suspect murder. On day two of the cruise, while swimming off Nassau in the Bahamas, Morgan discovers the body of her nasty roommate, Jackie, weighted down in a duffel bag under water. (A lucky find, that.) Jackie, who had expensive tastes in men, had clearly been up to no good, but what does her murder have to do with Angela's death? When someone trashes Morgan's cabin, spray-painting obscenities on the walls, the pun-loving actress takes the vandalism in stride. Vicious killer on the loose or not, the show must go on, with Morgan gamely serving as the lady who gets sawed in half by the ship's magician. The solution to the two murders that the authors conjure up hardly registers, since their heroine's overwhelming personality has upstaged even the plot long before the end. A subplot involving Morgan's Uncle Leo, who turns up on the cruise accompanied not by his wife, Bertha, but by a gorgeous blonde, presumably will be resolved another time Morgan hits the boards. Agents, Jane Jordan Browne and Annette Green. (July)
close
Details