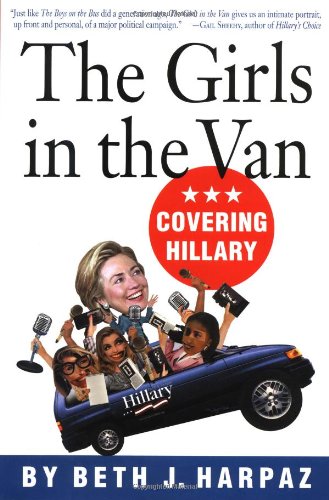 THE GIRLS IN THE VAN: Covering Hillary

For two long years, Associated Press staff writer Harpaz covered Hillary Clinton's Senate election campaign. This journal of those days serves as an update of Timothy Crouse's 1972 insider's account of political reporting, . It's a worthy successor—insightful, honest and funny. Much has changed in reporting since 1972. Typewriters and telephones have been replaced by laptops and Palm pilots, and women, all but absent in Crouse's book, make up half of the reporters covering Clinton. Harpaz spends most of her time trying to gain access to the always aloof Hillary, no easy task since, as depicted here, she uses her status as First Lady, and all the security that entails, to keep the press at bay. Only after months of scheming and begging, for instance—in an episode that's both hilarious and telling—is Harpaz able to get a simple list of favorites (color, food, movie, etc.) from the candidate. In the end, Harpaz can't decide if Hillary is a controlling politician or a sincere public advocate, a cold schemer or warm friend to all, and she comes to realize why her subject has been such a lightning rod for both hate and adoration. There's more here: how reporters cope with the absolute boredom of hearing the same few speeches months on end, how Harpaz tries, not very successfully, to have a normal home life for her two small children while working a time-consuming job. But it's soon-to-be-Senator Clinton who dominates the story, and Harpaz offers an insightful portrait that is a joy to read.