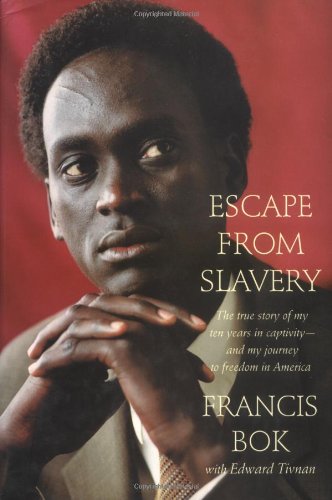 ESCAPE FROM SLAVERY: The True Story of My Ten Years in Slavery—and My Journey to Freedom in America

Seven-year-old Francis Piol Bol Buk was living happily on his family's southern Sudan farm. One day in 1986, he was sent on errands to the marketplace. There, a slave raid ripped him from his contented life and threw him into a wretched existence serving under a northern Sudanese Arab. After he escaped at age 17, Buk made his way to Cairo with a black market passport incorrectly listing his name as Bok and became a U.N. refugee allowed to settle in the U.S. in 1999. Although he found contentment in Iowa among other refugees, the following year Bok decided to work with an American antislavery organization, and testified before Congress about the atrocities in Sudan. While this is a remarkable story, its power is conveyed most effectively through Bok's simple retelling. His sincerity compels, especially when he describes the decade of mistreatment he endured. After two failed escape attempts, he's told he'll be killed in the morning, and while bound, he thinks of the morning ahead: "I would be dead and finally through with this place and this family. My mind preferred death." Yet when his master changes his mind, Bok immediately starts plotting again. For all his emotional strength, though, Bok remains humble. He thanks God and everyone who helps him escape slavery. This is a powerful, exceptionally well-told story, equally riveting and heartbreaking. Although legal strides have been made, with the help of people like Bok, the persistence of slavery in the world makes this a work that can't be ignored. Maps, photos not seen by .