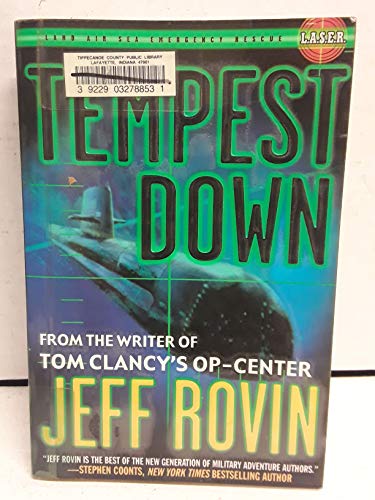 Rovin, author of Tom Clancy's popular Op-Center series, takes the reader on a bone-chilling ride to Antarctica in his first stand-alone military thriller (after two horror novels, and ), packed with military strategy, submarine warfare and personal sacrifice. Meticulous Maj. Tom Bryan is field commander of the U.S. military's new LASER (Land, Air, Sea Emergency Rescue) team, a highly qualified unit trained to save trapped or stranded military personnel. The team gets its first chance to act when the , a high-tech submarine, goes on a top-secret scientific test run in Antarctica and encounters the , a Chinese submarine on an elusive mission all its own. Trouble ensues, and the LASER and crews must stave off an international political crisis while engineering an underwater rescue mission. Do they risk exposing the secrets or do they save the lives of dozens of sailors? The large, lively cast includes a stubborn rear admiral nicknamed "Stone," a Chinese intelligence officer afraid of defeat and an arrogant, regulations-obsessed mission scientist. Rovin weaves a story so intricate and intense, readers will find themselves clutching the edge of their seats. The copious tech talk will deter some, and Rovin's writing is choppy, but the nail-biting suspense and rousing heroism may push Rovin out of Clancy's shadow for good.