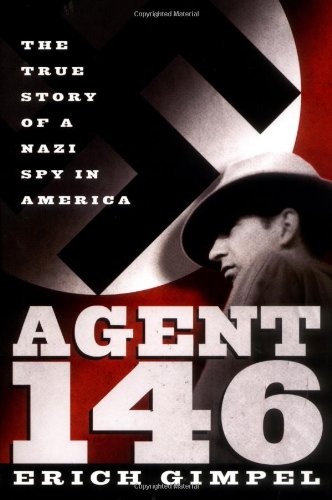 AGENT 146: The True Story of a Nazi Spy in America

What is it like to pass yourself off as an ordinary citizen in an enemy state for nefarious purposes? After September 11, the problem of "sleepers" has made this question all too urgent, which may be why Thomas Dunne is issuing the first U.S. edition of this riveting 1957 memoir. Gimpel's WWII mission in the U.S.—to learn about the Manhattan Project and, if necessary, destroy factories related to it—took place late in the war, when Germany's defeat looked increasingly inevitable. His co-infiltrator was an untrustworthy American Germanophile, William Colepaugh. Gimpel's "deliberately unsentimental" narrative is exemplary in its unfussy clarity (while also mirroring the amoral, cipherlike personality that permitted him to succeed so well at espionage). Much of the book makes for breathless reading—his plan to destroy the Panama Canal,his 46-day U-boat voyage across the Atlantic, his clandestine entry into the U.S., his suspicion-fraught dealings with the unreliable Colepaugh in New York, his furtive love affair with an American woman unaware of his true identity, right up to his arrest by the FBI. His account of interrogation, trial and incarceration is no less compelling. The passages describing his scheduled execution read like something out of Poe, and the most remarkable aspect of the book is perhaps the improbable deferral of his execution with only hours to go. His sentence commuted to life imprisonment, Gimpel was paroled in the 1950s and died in Germany in 1996. Anyone with the remotest interest in WWII or espionage should find this memoir exciting reading.