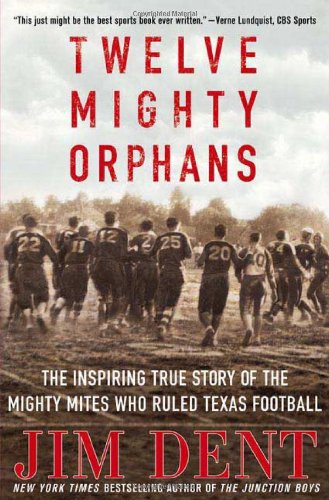 Dent, who told the story of Bear Bryant's brutal preseason training of the 1954 Aggies in , turns to the incredible story of Rusty Russell and his undersized team of orphans who dominated the gridiron of Texas high school football for the better part of the 1930s. True underdogs, most boys from the Masonic Home never held a real football; they used two socks stuffed together as footballs and, when Russell first took over, used Clabber Girl baking cans during practice. But the lean, scrappy Mighty Mites—as they were later dubbed—achieved an 8-2 record their first season of play in Class B. A few years later, in 1932, they moved up to Class A, the big leagues of high school football at the time. There, the Mites would face teams that outweighed them by as much as 50 pounds per man and fielded 47 players to their 12, and the orphans would win. Dent's strength is his play-by-play accounts of key games, but descriptions of personal interactions are often forced and lifeless. Also, many characters and events that are introduced at length don't factor significantly into the larger story line. Dent does more to mythologize the team and its players than to give them flesh and blood.