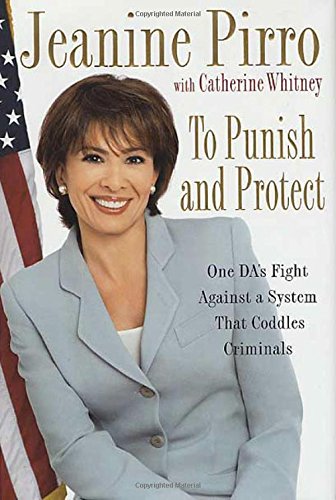 TO PUNISH AND PROTECT: One DA's Fight Against a System That Coddles Criminals

Westchester County District Attorney Pirro, writing with Whitney, declares her hatred of violent crime and brutal criminals in this book of essays. After nearly 30 years as a prosecutor, Pirro sees herself at the center of a battleground of good vs. evil; she has no doubt of her rectitude. She and her assistants are the avengers who seek justice on behalf of crime victims, often ignored or marginalized by the criminal justice system. The book's chapters focus on the most horrific imaginable crimes, from sexual predation directed against children to spousal murder, from elder abuse to hate crimes. For each type of atrocity, Pirro cites examples drawn from her prosecutorial experience. Throughout, she empathizes with the victims and their families, comforting them and advocating expanded public services to help them heal. She also urges reforms of the criminal justice system, such as eliminating the insanity defense from the guilt phase of criminal trials and modifying the presumption of innocence so that bail can be denied to persons accused of heinous crimes. Pirro also favors the death penalty (although she decided not to seek it in 10 of 11 death-eligible cases she has handled as district attorney). This book serves several purposes: to stoke public consciousness of crime and contempt for criminals, to mobilize support for toughening the penal laws and to position the author as a remorselessly angry crusader. As she states, hers is an elected position, and a book such as this will serve the author well as campaign literature.