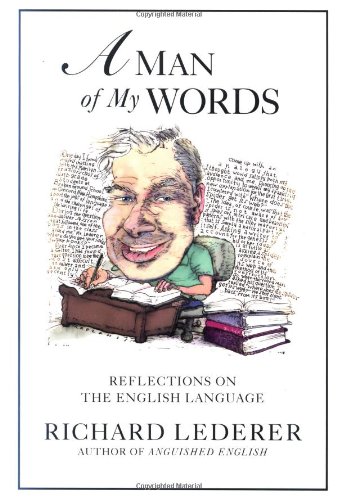 A MAN OF MY WORDS: Reflections on the English Language

William Safire has sparked many word debates, but also burning brightly is 65-year-old word detective and language lecturer Lederer ( , etc.). Self-labeled Attila the Pun and Conan the Grammarian, he reaches a million readers with his syndicated "Looking at Language" column. His columns have been slightly rewritten to spice up this clever collection, an appetizing antipasto that fishes for pungent puns. Topics range from split infinitives to political correctness, from word play to letter play: "TWENTY-NINE is spelled with letters made of lines only—twenty-nine of them, to be exact." He begins with American and Britspeak divergences ("Colour by Technicolor") and words substituted in Cockney rhyming slang: "D'ye 'ear me, or are ye Mutt and Jeff? = Do you hear me, or are you deaf?" These subjects and several others are posed as games and quizzes. Listing words with Native American origins (apossoun = opossum), he moves on to accents, bilingual puns, circus argot, long and short words, the origin of OK, poker parlance, pop culture catchphrases ("Isn't that special?") and Southernisms. One amusing piece is totally written in the clichés of "fadspeak": "Do the math. Get used to it.... It's a done deal because I've got a full plate, and I bring a lot to the table." Actually, Lederer does bring a lot to the table, joking and gagging up a total of 45 essays, mostly entertaining but best digested in small portions.