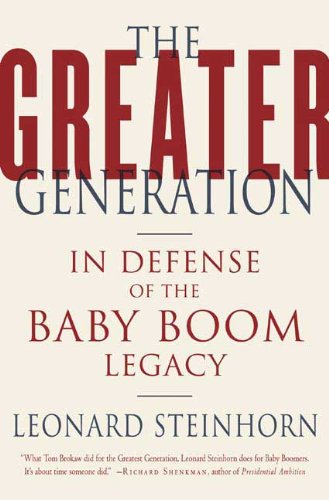 The Greater Generation: In Defense of the Baby Boom Legacy

Baby boomers have been vilified as noisy, self-centered, childish, elitist and self-indulgent. Steinhorn forcefully and gracefully defends his age cohort against these stereotypes in a paean to the generation that has forever altered the face of American culture. The so-called "greatest generation," he says, imposed a cultural complacency whose worst elements included racism, sexual inequality and anti-Semitism. Boomers rebelled against their parents' values, striving to create an inclusive society that would recognize the contributions of all of its members. Defying and denouncing authority, the baby boomers protested against an unjust war and challenged an unethical political system. Even after the clamor of the 1960s quieted down, boomers refused to tolerate environmental violations, continued to challenge racial and sexual discrimination, rejected religious intolerance and defied racial and sexual taboos. And despite an apparent conservative turn in America, says Steinhorn, boomer values have in fact permeated our society to the point where a younger generation takes them for granted. This powerful book by Steinhorn, a professor at American University's School of Communications, reminds us that boomers continue to provide the methods and the impetus that are moving many young people today to challenge political arrogance, deceit and jingoism.