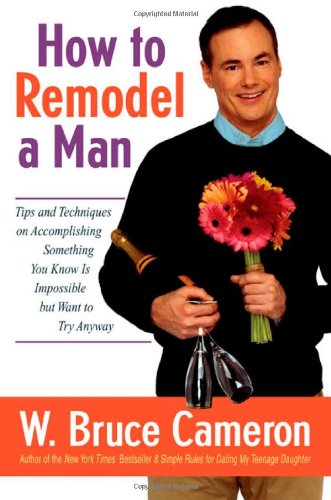 How to Remodel A Man: Tips and Techniques on Accomplishing Something You Know Is Impossible but Want to Try Anyway

Humor columnist Cameron follows his bestselling 8 (2001) with a somewhat scrambled but goofily satisfying parody of inspirational how-to books. While warning women that effecting real change in their men is nigh impossible ("Attempting to modify a man's behavior is like trying to talk cats into playing the tuba—even if you can convince them to put their lips on the thing, they'll never understand "), he does offer plenty of tongue-in-cheek hints: to get a man to exercise, for example, buy him cool new gear; to cope with a man who snores, "teach yourself to snore back in self-defense." As an ostensibly "Changed Man" himself, Cameron is free to paint a comically unflattering portrait of male behavior in sections such as "Male's Verbal Skills Are Slow To Develop, and Then They Stop." In other words, men are idiots, and Cameron offers numerous funny takes on that thesis—only some of which might sound familiar to readers of , a classic comic take on the male psyche. .