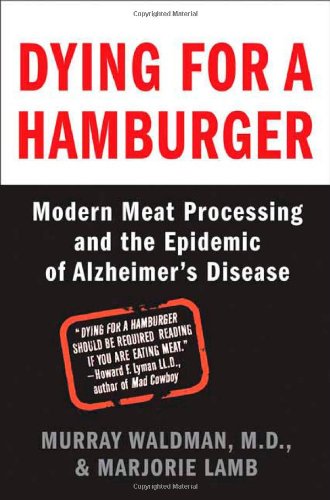 Dying for a Hamburger: Modern Meat Processing and the Epidemic of Alzheimer's Disease

Alzheimer's disease is the fourth leading cause of death among older Americans, but its cause remains a mystery. Waldman, coroner for the city of Toronto, and Lamb ( ) argue that Alzheimer's is a new disease and not, as many believe, one that has simply become more widespread as people live longer. The authors assert that, like mad cow disease, it's caused by infectious agents called prions; the protein plaques in the brain of Alzheimer's patients, they argue, resemble those in the brains of people with prion diseases. (Stanley Prusiner, the Nobelist who discovered prions, speculated 20 years ago that Alzheimer's might be a prion disease.) Waldman and Lamb believe the increased incidence of Alzheimer's is due to mass consumption, and the resulting mass production, of meat over the last century, which would explain its rarity in places like India. Scientists have shown that prion diseases can be transmitted between species (e.g., from cows to humans), and that high temperature doesn't kill prions. This isn't a jeremiad against eating meat. Waldman and Lamb lay out their case in a measured fashion that many will find convincing and disturbing.