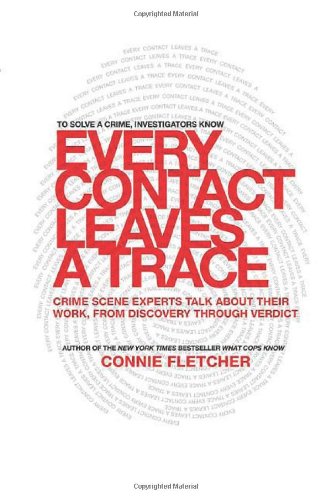 Every Contact Leaves a Trace: Crime Scene Experts Talk About Their Work from Discovery Through Verdict

Fletcher adopts the same approach to the world of CSI that she previously used with success in . Excerpts from more than 80 interviews with experts at various stages of the criminal justice process, including some well-known names, such as Dr. Henry Lee and 's Ed Conlon, acquaint the uninitiated reader with the vast differences between television and reality. Ultra–high tech isn't always necessary for crime solving, Fletcher shows; qualified forensic scientists can make a big difference in the search for justice even in small communities with limited resources. Many of those she spoke with express chagrin that the popular fiction TV series has given the public a false impression of the resources available to the average police force and the pace at which the analyses of DNA or trace evidence occur. One especially well-crafted section contrasts the efforts to identify 9/11 victims with a small Midwestern town's search for the killer of a young girl. Some of the entries are a little skimpy, but readers will be drawn in to the longer excerpts and the basics of how crime scene evidence is examined.