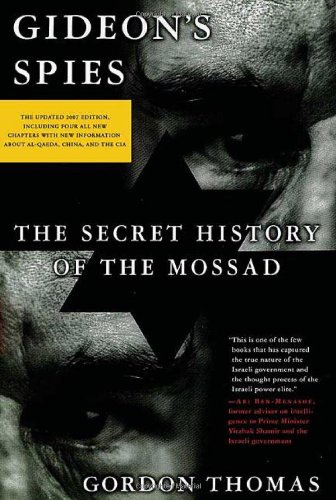 Gideon's Spies: The Secret History of the Mossad

Among the world's most respected and feared intelligence services, the Israeli Mossad encompasses shadowy networks of (case officers) often operating undercover, from Washington to Tehran to Beijing. The third update of this well-received book adds expanded sections on postinvasion Iraq, the black market in nuclear material, and other topics, tying up several loose ends from the earlier editions. Large portions remain unchanged, however, giving the book an uneven quality, as some chapters were written in 1994, some in 1999, some in 2004 and some last summer. Thomas's engrossing stories about assassinations, target surveillance and other skullduggery keep the pages turning, but the serious student of the Middle East may be put off by some purple prose, for example, about Saddam in incarceration: "His shaggy salt-and-pepper beard is trimmed once a week, enhancing his sharp, penetrating eyes.... But he will have an opportunity to state his case—more than he had ever allowed those he murdered." Skeptics will wonder what ulterior motives inspired Thomas's many tight-lipped sources to open up to him and will question their information, particularly regarding the more incredible conspiracy theories he writes about. Overall, however, Thomas provides a rare and valuable glimpse at the inner workings of a very secretive organization.