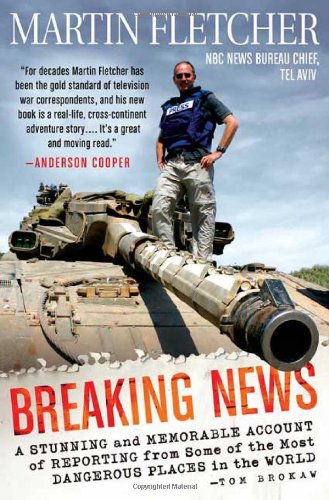 Breaking News: A Stunning and Memorable Account of Reporting from Some of the Most Dangerous Places in the World

Currently NBC news bureau chief in Tel Aviv, Fletcher offers a vivid account of his 30-year career as a war correspondent in the hot spots of the globe. At age 25, Fletcher grew bored with his BBC desk job and grabbed a position as a cameraman with a video news agency. Five days after he arrived in Israel for his second assignment, Egypt and Syria invaded. With no experience under fire, Fletcher found himself dodging bullets on the front lines—and loved it. Over the following decades, wherever there was a conflict—Rhodesia, Somalia, Afghanistan, Kosovo, South Africa, the killing fields of Rwanda, the first and second intifadas—Fletcher covered the scene. While documenting his adventures, Fletcher also gives a riveting portrayal of the suffering around him and of the macho adrenaline junkies who make up his profession. Fletcher has a clear understanding of the ambiguities of his position as a purveyor of misery and death—for one story, he finds a Somali refugee near death and films her until she stops breathing. Fletcher's engagement with his own family's suffering in the Holocaust adds complexity to a narrative that is both fast-paced and moving.