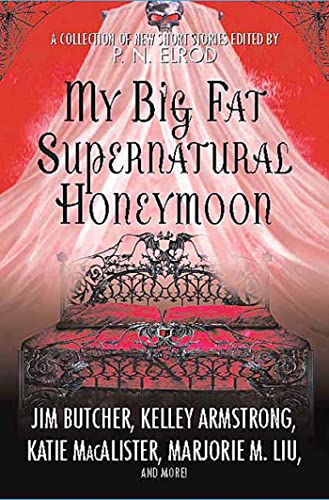 As with 2006’s , several of the contributors to this lighthearted anthology of honeymoon-themed supernatural romance stories struggle with the short form. Marjorie M. Liu proves to be especially adept, providing the evocative and folkloric “Where the Heart Lives.” Fans of Chicago’s supernatural detectives will be pleased by Jim Butcher’s “Heorot,” where Harry Dresden tracks down a missing bride, and P.N. Elrod’s “Her Mother’s Daughter,” where Jack Fleming hunts for a vanished bridegroom. Things get more romantic with Kelley Armstrong’s amusing “Stalked,” in which a stalk, chase and fight spice up a werewolf honeymoon, and Rachel Caine’s charming “Roman Holiday or Spq-arrrrr,” featuring an undead pirate captain and his new bride who must face down a mutiny and an ancient Roman pirate. Some readers may be a little disappointed to find that despite the romance billing, most stories have far more hex than sex, but fans of the featured authors will be quite satisfied.