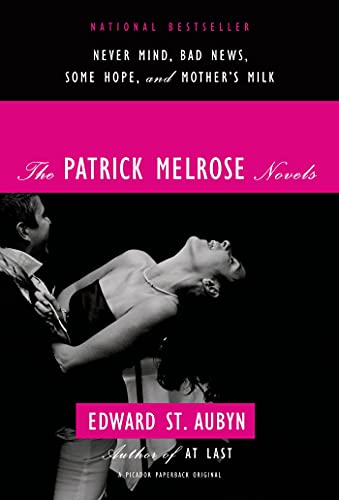 Coinciding with the publication of At Last, this omnibus edition shows that St. Aubyn’s five Patrick Melrose novels may well constitute one of the most ambitious novel cycles since Anthony Powell’s A Dance to the Music of Time. Where Powell wrote about a wide swath of 20th-century English social history, St. Aubyn’s milieu is more focused and constrained, detailing the life of the scion of the eccentric, wealthy, and cruel David and Eleanor Melrose. Never Mind introduces the Melrose family over the course of a day and a half at their home in Provence, France: Dr. David Melrose, wife Eleanor, the five-year-old Patrick, and a vast assortment of hangers-on attracted to aristocracy and wealth. The novel also introduces the author’s chief narrative technique of confining foreground action to a short time span, which affords him ample opportunity for musing and introspection, rendered with elegant, pithy prose. In Bad News, Patrick is 22 and headed to New York in the 1980s “to collect my father’s corpse,” as he explains at customs. He’s also addicted to heroin and cocaine, and devotes as much time searching for drugs as he does coming to terms with his hated father and his death. Eight years later, in Some Hope, Patrick is studying law (by renting courtroom dramas) and recovering, from both addiction and an excruciating personal history: “his past lay before him like a corpse waiting to be embalmed.” And in Mother’s Milk, the most hopeful of the books in this volume, Patrick is married, somewhat unhappily, and a father (the amazing opening pages are written from the newborn Robert’s perspective; only hours old, he notes that “he couldn’t live with so much doubt and so much intensity”). Still haunted by his own father, Patrick must deal with his mother’s crackpot philanthropy, sure to destroy the family fortune. This cycle is no ordinary family saga, or even that of an extraordinary family (which the Melrose clan certainly is); plot summaries don’t touch on St. Aubyn’s gift. Though the author has clearly mined his own experience, he has refined it into something exquisite, an exploration of consciousness and the journey from the helplessness of childhood to “the pure inevitability of things being as they were,” as elegant a definition of acceptance as anyone is likely to write. And his serious purpose is buoyed by an abundant wit, laugh-out-loud funniness, and piercing observations into the world of privilege and entitlement. Agent: Aitken Alexander Associates. (Jan.)
close
Details