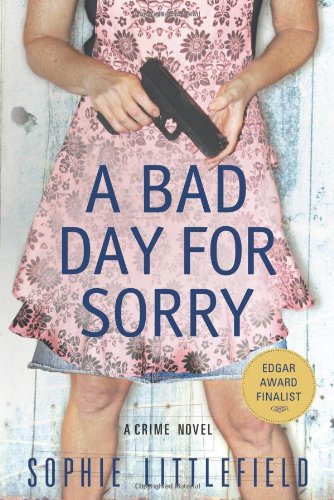 A Bad Day for Sorry

Littlefield's amusing, sassy debut introduces Stella Hardesty, a widow and survivor of domestic violence, who owns a sewing shop in a sleepy Missouri town. On the side, Stella solves problems and metes out justice on behalf of battered women, like Chrissy Shaw, whose abusive bully of an ex-husband, Roy Dean Shaw, Stella keeps tabs on. After Roy Dean absconds with Chrissy's baby, Stella learns he's involved with local mobsters in a stolen auto parts ring. Chrissy sheds her victimhood to team up with Stella and do battle. After girding up their weaponry, the unlikely crime-fighting duo trick their way into the home of Roy Dean's mob boss, who they suspect has Chrissy's son. Stella discovers that no amount of preparation and righteous anger can prevail over pure evil, at least not without loads of trouble. Spunky, unapologetically middle-aged and a tad cantankerous, Stella barges bravely and often unwisely into danger.