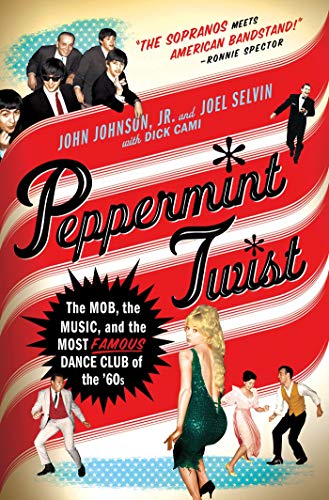 Peppermint Twist: The Mob, the Music, and the Most Famous Dance Club of the ’60s

In the years just before a new dance called the Twist turned popular music around and created new audiences for rock and roll, Johnny Biello, famed mobster, bought a rundown club in midtown Manhattan as a front for his businesses, and put his son-in-law, Dick Cami, who had already devoted some of his career to the music business, in charge of booking acts for the club. When Cami suggested that they book rock and roll acts, Biello and his gang had some misgivings, but soon the new Peppermint Lounge was pulling in teenagers, socialites, mobsters, and celebrities, all drawn like a moth to the burning flames of rock and roll, and especially the Twist. Through lackluster storytelling and over-the-top pronouncements (“The seeds to everything that became the sixties can be seen in the coming of the Twist”), journalists Johnson and Selvin along with Cami attempt to recreate the few months in 1961 and 1962 when the Peppermint Lounge became the hottest night club in New York, opening a second club in Miami. The narrative totters unevenly between a long, dull dual biography of Biello and Cami before finally launching into a brisk and abbreviated chronicle of the club and its famous denizens, who ranged from Truman Capote, Marilyn Monroe, Shelley Winters, and John Wayne to rhythm and blues moguls Berry Gordy and Ahmet Ertegun and rockers from the Beatles to Ronnie Spector and the Ronettes. Superficial and meandering, the book offers few compelling insights into the history of the Peppermint Lounge or its success. (Nov.)
close
Details