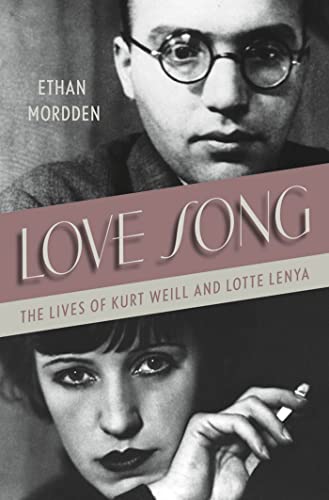 Love Song: The Loves of Kurt Weill and Lotte Lenya

One of the 20th-century’s greatest composers, Weill, a Jewish cantor’s son in Germany, whose only interest was music and who wrote an adaptation of a Rilke poem when he was 19, changed when he met the attractive and pleasing daughter of a Viennese coachman, Lotte Lenya, in Berlin. Lenya’s mother had told the young girl that though she was not pretty, men would be crazy about her all her life, and indeed she wrapped Weill and numerous other musicians, artists, actors, dancers, and audiences around her little finger. In this dual biography that is more Weill than Lenya, music historian Mordden monotonously marches through the lives and times of each individual, tracing in detail their childhood and young adulthood, the paths that took them to Berlin and their first meeting, their tumultuous marriage and brief divorce, their successes in Germany in the theater and in film, and their move to America where each established lasting reputations. Although Weill’s successful collaboration with Bertolt Brecht on The Threepenny Opera followed him throughout his life, he also went on to some measure of triumph with his Broadway shows, Street Scene (1947), and Knickerbocker Holiday (1938). After Weill’s death, Lenya gained considerable notice in films, first as Rosa Klebb in The Roman Spring of Mrs. Stone and then as James Bond’s nemesis in From Russia with Love. Mordden follows ground well-trod by previous biographies of Weill (The Days Grow Short [1991]; Kurt Weill [1997]) and Lenya (Lenya: A Life [1990]), offering little new or compelling information about the pair. Agent: Joe Spieler. (Oct.)
close
Details