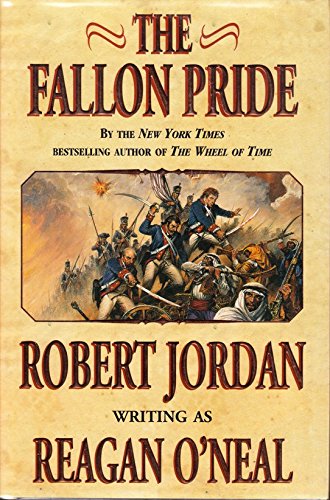 Because the name Robert Jordan sells books (as with the recent bestseller A Crown of Thorns), the publisher has chosen to attribute this novel to ""Robert Jordan writing as Reagan O'Neal."" Robert Jordan is a pseudonym as well, however. The author's real name is James Oliver Rigney Jr., and, in 1981, before he ever wrote as Robert Jordan, he penned this vigorous, bodice-ripping historical as the second novel of a trilogy (begun with The Fallon Blood, 1980, reprinted in hardcover in 1995). The narrative here bursts with information about the sea (""Occasionally a lateen-rigged polacca or xebec slowly circled the brig, swarthy crew staring unblinkingly"") and the state of political affairs at the dawn of the 19th century. Madison, Burr, Monroe, Jefferson and even Davy Crockett are all thrown into this complex tale of Captain Robert Fallon--merchant, patriot and lover par excellence. Fallon is the sworn enemy of two evil and powerful men, Justin Fourrier and a pirate named Murad Reis, who try, with little luck, to hunt Fallon down as he sails around the world. A dose of incest is also tossed into the convoluted plot as Fallon and his half-sister, Catherine, fall into each other's arms. This is old-fashioned entertainment--that is, typical of the genre in the early 1980s--in which good and evil are as clear as the water is blue and subtlety is an unknown entity. Jordan dashes it off with energy, and it's easy to discern here the seeds of the popular fantasy novels to come. (Oct.)
close
Details