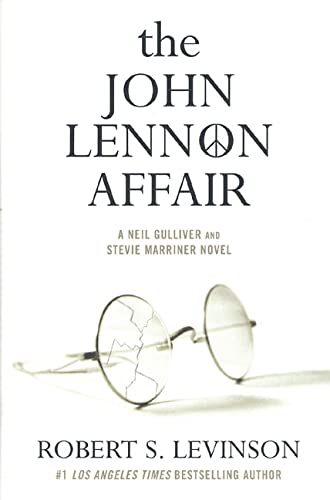 Levinson's long experience in music public relations, the handling of rock stars, and writing and producing has provided him with material and styles enough for three novels, but not enough of substance for any one novel. Following hot on the heels of and , his latest eulogizes the murdered Beatle, the story split between Lennon's own time and a huge, mob-inspired John Lennon Imagine That! Memorial Rock Festival in 2001. Making their third appearance are Levinson's series protagonists, newspaperman Neil Gulliver and TV actress Stevie Marriner, known as the "Sex Queen of the Soaps." Gulliver covered Lennon's death, and now he and Stevie find themselves appearing in the massive festival in his honor. Someone doesn't want them around, though, and will kill to keep them away. Ironically, among the parade of stock supporting characters—crooks, assassins, drunken Indians, politicians, actors, sinister Treasury agents and "Feebies" (FBI agents)—Lennon himself is only peripheral. He is given occasional lines, once at an earlier festival: "They have a bloody foogin' concert in me honor to raise money to wipe out weapons, and it brings on one gun going off after the bleeding next." It may be news that Mark David Chapman, who shot him, had been hired to shoot President-elect "Dutch" Reagan instead. Enough names are dropped to fill an agent's Rolodex (including those in a lengthy author's note), and gags abound, but more attention to plot would have been helpful for the bewildered reader. Readers who pick this up hoping for all Beatles all the time will be disappointed—what they'll get is a mediocre mystery with the musician as hook and the rock scene as background décor.