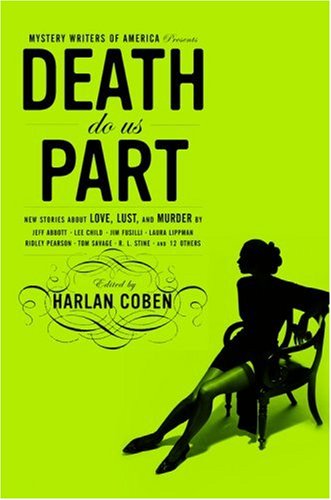 Death Do Us Part: New Stories about Love, Lust and Murder

The latest anthology from the Mystery Writers of America offers a high quality assortment of stories propelled by human passions behind crimes both hot- and cold-blooded. Despite the participation of such noted authors as Coben, Charles Todd, Laura Lippman and R.L. Stine, the gems come from lesser knowns. The standout is Charles Ardai's "The Home Front," a noir tale that Cornell Woolrich fans will relish, recounting the travails of a WWII-era federal agent whose role in the accidental death of a black marketer haunts him and leads to further disaster. Brendon DuBois's "The Last Flight," a taut tale of revenge, and Lee Child's "Safe Enough," about a dark secret uniting an upscale woman and her electrician, will also linger for many readers. Cozy and fair-play fans won't find much specifically aimed at them, but fans of quality short fiction should be satisfied.