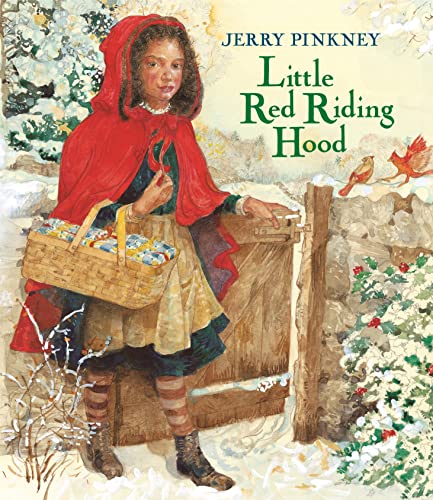 Produced in the same generous format as Pinkney's ( ) previous retellings of classic tales, this inviting work opens with a view of the heroine's mother posed very much like Whistler's mother, stitching a certain red cloak as a small window shows snow falling. Next she fills a basket with chicken soup and raisin muffins for ailing Grandmother and instructs her daughter, “Mind you, little miss…. Be certain to go straight there.” As the girl sets out, the full-bleed art, rendered in Pinkney's characteristic style, reveals snowy woodlands in which animals and birds are cleverly camouflaged. The wolf, however, appears front and center. He “had a mind to eat her up at once,” but the presence of woodcutters nearby deters him, and so he addresses her “in his most pleasant voice.” The inclusion of various sounds—the “crunch, crunch” of the child's footsteps in the new snow, the “chop, chop” of the woodcutters' tools, and so on—augments the book's appeal as a read-aloud. The wolf, although seen repeatedly with its jaws open, sharp teeth bared, mostly cuts a comical figure, poorly disguised in Grandmother's nightgown and cap. The writing and the art are spry and satisfying, and with its blue-eyed African-American heroine, this book will be especially welcomed by families looking for traditional tales that feature a multiracial cast. Ages 3-6.