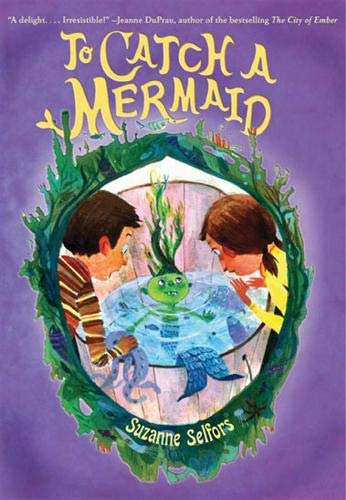 To Catch a Mermaid

When the unlikely hero of Selfors's assured debut, a luckless sixth grader named Boomerang “Boom” Broom, inadvertently brings home a baby mermaid instead of cheap seafood from the fish market for dinner, he sets off a madcap chain of events that turns his house bright pink, transforms his bathroom into a tropical beach replete with banana tree and monkey, puts his little sister Mertyle's life in grave danger, and miraculously heals his dysfunctional family from the sudden and bizarre loss of his mother. The baby mermaid, the ill-tempered antithesis of Disney's Princess Ariel with razor-sharp teeth and green-seaweed hair, possesses powerful magic that, at first, makes Mertyle's unwitting wishes come true; but the merbaby also brings with it a deadly curse that soon afflicts Boom's sister in the form of a bizarre white fungus. With time running out, can Boom find a cure for his fuzz-covered sibling? Featuring some outlandishly funny characters (among them the villainous, “big-butted” principal Mrs. Prunewallop and Halvor, the family cook who models himself on Erik the Red), Selfors's adventure also subtly explores serious themes like grief, adversity and misfortune. In a nutshell—or, more fittingly, a conch shell—her nimble fantasy is about Boom's journey of self-discovery and the feeling that comes from achieving a seemingly unreachable goal. A few unresolved plot threads, notably to do with the mother, point to a sequel. Ages 8-12.