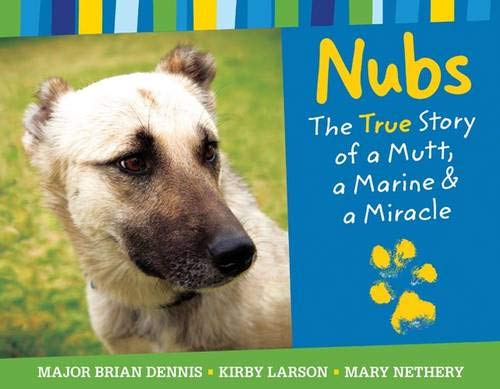 Nubs: The True Story of a Mutt, a Marine and a Miracle

Larson and Nethery, who collaborated on , team up with Dennis to tell the moving story of the Marine major’s friendship with a wild dog he befriended at a border fort in Iraq. Dennis named the dog Nubs because his “ears had been cut off to make him a dog of war” (a statement never explained). Though Nubs futilely attempts to follow Dennis when he departs the fort, the two grow closer on subsequent visits, until the dog (now wounded) treks 70 miles through the snow to find Dennis. When the major is ordered to “get rid of the dog, or else,” he raises money to have Nubs transported to his San Diego hometown, where human and dog eventually reunite. Some spreads feel cluttered with narrative passages, e-mail sidebars, and multiple images; the photographs, gleaned from several sources, are of varying quality and resolution (understandable given the circumstances under which most were taken). But these do not diminish the emotional impact of the saga, which should appeal to fans of and other stories of animals that triumph against the odds. Ages 3–up.