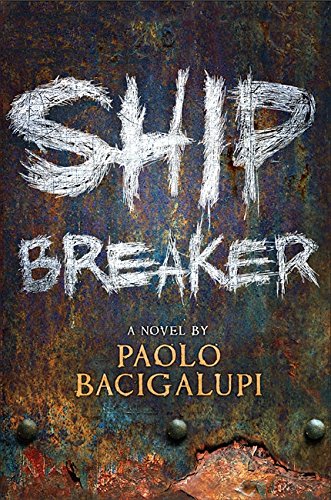 SF novelist Bacigalupi ( ) makes a stellar YA debut with this futuristic tale of class imbalance on the Gulf Coast. Teenage Nailer scavenges ships with his crewmates, eking out a poverty-filled existence while avoiding dangers that range from giant “city killer” hurricanes to his vicious, drug-addicted father. When a storm strands a beautiful shipping heiress on the beach (earning her the nickname “Lucky Girl”), Nailer manages both to infuriate members of his camp (including his father) and to become embroiled in upper-class trade disputes that he barely comprehends. As Nailer and Lucky Girl escape toward the drowned ruins of New Orleans, they witness rampant class disparity on individual and international levels (tribes whose lands were flooded have taken to the seas as pirates, attacking multinational shipping firms). Bacigalupi's cast is ethnically and morally diverse, and the book's message never overshadows the storytelling, action-packed pacing, or intricate world-building. At its core, the novel is an exploration of Nailer's discovery of the nature of the world around him and his ability to transcend that world's expectations. Ages 12–up.