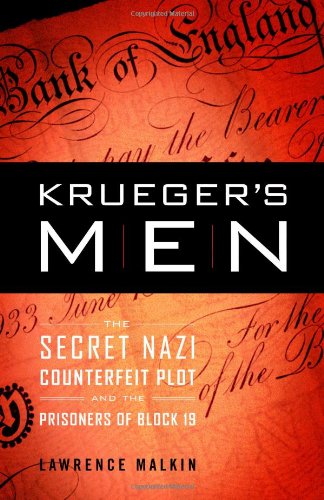 Krueger's Men: The Secret Nazi Counterfeit Plot and the Prisoners of Block 19

Former correspondent Malkin tells a remarkable, little-known story from WWII: the Nazis' use of concentration camp prisoners to produce counterfeit British (and later American) currency and dump it to sabotage the Allied economies. Some readers might find Malkin's setup a bit slow, but the main events, deeply researched and tautly narrated, form a tale of opportunism made for a movie. The Nazis realized the labor could be drawn from concentration camps, and the prisoners realized that volunteering for the effort could save their lives. At the height of the operation, headed by SS officer Bernhard Krueger, the Jewish prisoners produced 650,000 notes a month. The counterfeiting helped finance some Nazi spy efforts, as well as other parts of the Reich's war machine, but it failed to bring down the Allies. As gripping as the tale of Operation Bernhard is, the story of how the Jewish counterfeit brigade—most of them prisoners at Sachsenhausen—survived the waning days of the war is even more so. 8 pages of b&w photos, 2 maps.