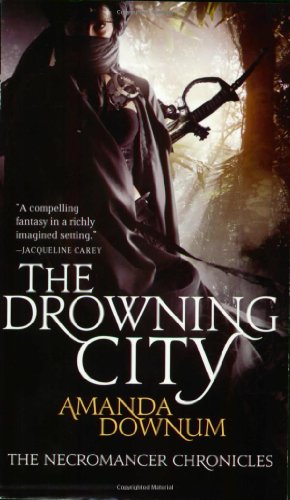 The Drowning City: The Necromancer Chronicles, Book One

Downum effectively combines action, magic, police procedure and political intrigue in this complex and striking debut. Isyllt Iskaldur, a Selafaïan forensic necromancer, travels to the monsoon-soaked canal city of Symir, capital of Sivahra. Her plot to undermine the occupying Assari Empire before it can invade Selafai is complicated by her attraction to handsome Imperial fire-mage Asheris. Isyllt’s bodyguard Xinai, a Sivahran native, despises the empire for its brutal destruction of her clan; young apprentice mage Zhirin Laii struggles between love for a guerrilla leader and loyalty to her mother, a respected politician. Refreshingly, Downum treats necromancy as an unclean but necessary defense against evil and nicely handles the complex nuances of a quasi-Westerner fomenting revolution in a quasi-Asian country occupied by quasi-Arabs. A strong (if not happy) conclusion still leaves plenty of room for sequels.