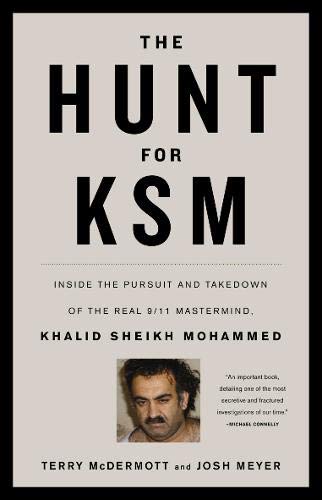 The Hunt for KSM: Inside the Pursuit and Takedown of the Real 9/11 Mastermind, Khalid Sheikh Mohammed

The cat-and-mouse game between American investigators and Khalid Sheikh Mohammed, architect of the 9/11 attacks and other terrorist spectaculars, unfolds with suspenseful immediacy in this engrossing saga. Journalists McDermott (Perfect Soldiers) and Meyer (the L.A. Times’s chief terrorism reporter) present a police procedural starring an FBI agent, Frank Pellegrino, Port Authority detective Matt Besheer, and the inter-agency anti-terrorism experts who tracked KSM and his confederates for a decade before his 2003 capture. The pursuit of their elusive quarry required legwork in Manila strip clubs and Karachi slums, electronic eavesdropping, computer forensics, and cagey, empathetic questioning of suspects. Inevitably, turf battles arose with the CIA, whose impulsiveness, tunnel-vision, and brutal interrogation techniques the authors portray as the ineffective antithesis of the FBI’s meticulous sleuthing. The authors’ vivid profile of Khalid Sheikh Mohammed depicts a resourceful, charismatic man—he retained his self-possession under CIA interrogation, they contend, while spewing false information that sparked wild goose chases—and paints a detailed portrait of the workaday terrorist life of fund-raising, recruitment, bomb-rigging, and general plotting, all carried out while dodging a global manhunt. The book is disjointed and breathless at times, but it gives us one of the most revealing dispatches yet from the war on terror. Agent: Paul Bresnick Literary Agency. (Mar.)
close
Details